WASHINGTON, DC and NEW YORK (May 9, 2014)— An estimated 1.1 million community health center patients are left without the benefits of health coverage simply because they live in one of 24 states that have opted out of the Medicaid expansion, a key part of the Affordable Care Act (ACA), according to a new report.

“These low-income patients, many of them living in the South, already face significant challenges to obtaining health care,” says lead author Peter Shin, PhD, MPH, director of the Geiger Gibson Program in Community Health Policy and an associate professor of health policy at Milken Institute SPH. “Our analysis suggests these patients will remain without access to affordable insurance, which will almost certainly lead to delays in care and the risk of more serious health conditions.” 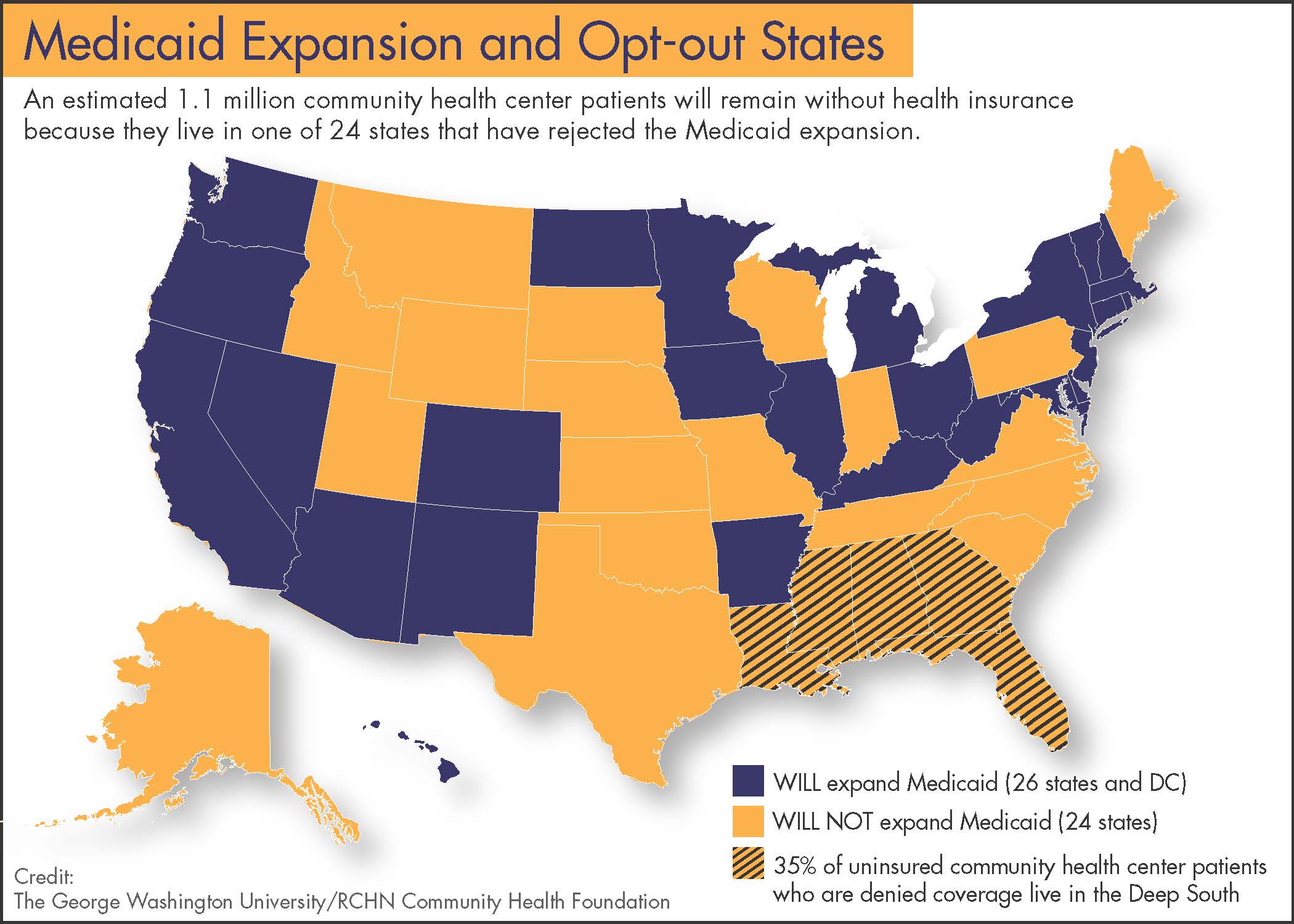 The new report updates earlier estimates to reflect health center growth between 2011 and 2012 as reported in the Uniform Data System. This latest analysis, like the previous one which was published in 2013, examines what happens to community health centers and their patients in both the Medicaid expansion states, including New Hampshire, which recently decided to expand Medicaid—as well as the 24 states that have continued to reject the Medicaid expansion.

Shin and his colleagues estimate that the ACA would have helped 5.2 million out of a total of 7.5 million uninsured community health center patients to gain health coverage either by buying affordable policies or qualifying for Medicaid under the expansion programs. However, 1.1 million of the 5.2 million who could have gained coverage will remain uninsured due to states’ decisions to opt out of the Medicaid expansion.

“Health center patients living in the South remain disproportionately affected by the failure to expand Medicaid,” says Sara Rosenbaum, JD, the Harold and Jane Hirsh Professor of Health Law and Policy at Milken Institute SPH. “Of the community health center patients denied coverage by virtue of their zip code, most live in the south and more than one third lives in the Deep South.”  Poor, minority patients in these states already face troubling disparities in health and health care. The decision to reject the Medicaid expansion threatens to make those disparities even worse, the report says.

The analysis also shows that health centers in the opt-out states will likely forgo over half a billion dollars ($569 million) in revenues they would have received under a Medicaid expansion. The loss of potential revenues presents significant challenges to these health centers, which already struggle to care for rising numbers of uninsured patients. In addition, the loss of federal revenues associated with an expansion also means these health centers will not be able to expand into areas that lack access to health care, the report says.

“While the number of uninsured Americans is going down across the nation thanks to the Affordable Care Act, the number of uninsured or underinsured patients seeking care at community health centers continues to grow,” says Feygele Jacobs, president and CEO of the RCHN Community Health Foundation. “By rejecting Medicaid expansion, these states are leaving our safety net health care system and the patients it serves in jeopardy.”

Community health centers in states that have expanded Medicaid face a very different future with 2.9 million uninsured patients in the expansion states gaining health coverage in 2014, according to the researchers. The increase in insurance payments will generate potential revenues of $2.1 billion in 2014, which help to pay for physicians, nurses, care for patients—and to further expand into isolated communities without access to crucial health care services.

The report, “Assessing the Potential Impact of the Affordable Care Act on Uninsured Community Health Center Patients: An Update,” can be accessed at go.gwu.edu/ggrchnbrief36.

The Geiger Gibson Program in Community Health Policy, established in 2003 and named after human rights and health center pioneers Drs. H. Jack Geiger and Count Gibson, is part of the School of Public Health and Health Services at The George Washington University.  It focuses on the history and contributions of health centers and the major policy issues that affect health centers, their communities, and the patients that they serve. Additional information about the Research Collaborative can be found online at http://publichealth.gwu.edu/projects/geiger-gibson-program or at rchnfoundation.org.