Washington, D.C., January 5, 2017—A repeal of key provisions of the Affordable Care Act (ACA) could lead to significant economic disruption and substantial job losses in every state, according to new research. In 2019 alone, 2.6 million people could lose their jobs. These losses could rise to nearly 3 million positions in health care and other sectors by the year 2021, says this first-of-its-kind study.

The study, from the Milken Institute School of Public Health at the George Washington University and The Commonwealth Fund, examines the impact of a potential January 2019 repeal of two parts of the 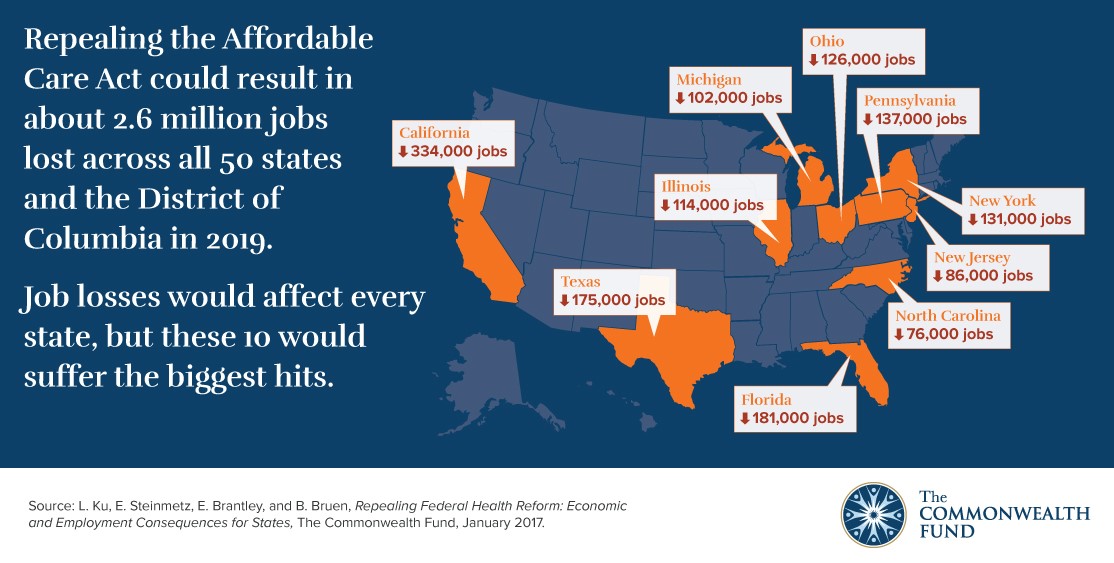 ACA: the federal premium tax credits that help low- and moderate-income people purchase insurance on the health insurance marketplaces (also known as exchanges) and federal support for Medicaid expansion. President-elect Drumpf and congressional Republicans have vowed the ACA’s repeal, which congressional leaders hope to advance this January. It is not yet clear whether a repeal bill will include detailed replacement policies.

“Repealing key parts of the ACA could trigger massive job losses and a slump in consumer and business spending that would affect all sectors of state economies,” said lead author Leighton Ku, Ph.D., director of the Center for Health Policy Research and professor of health policy and management at the Milken Institute. “Cuts in federal funding would not only harm the health care industry and its employees but could lead to serious economic distress for states, including a $1.5 trillion reduction in gross state product from 2019 to 2023.”

The study focused solely on the effects of repeal of Medicaid expansion and premium tax credits.  It did not explicitly model the effects of other provisions that might be considered such as elimination of some taxes and penalties. However, other research suggests that the effect of these changes on employment would be modest.

The research finds that the effects of repealing the tax credits and Medicaid expansions could include:

This analysis is the first to suggest that the effects of repealing the ACA would extend well beyond the loss of health insurance and access to health care for millions of Americans. Repeal would also trigger large reductions in employment and state economic growth. The study assumes that the savings from the spending cuts are not used for other purposes like infrastructure investment that might offset some of the job losses in some states.

“The immediate and most visible effect of ACA repeal would be the loss of coverage and access to care for millions of people who have gained insurance because of the law,” said Sara Collins, Ph.D., vice president for health care coverage and access at The Commonwealth Fund. “This study points to even larger potential economic effects that would be detrimental to the health and well-being of millions more.”

“Repeal of the ACA would create a major disruption for the health care safety net, including community health centers and the patients they serve” said Feygele Jacobs, President and CEO of the RCHN Community Health Foundation.  “Newly uninsured patients will still require medical services, but the resources to support their care could disappear.”

The report was supported by a combination of funds from The Commonwealth Fund, the Geiger Gibson RCHN Community Health Foundation Research Collaborative and the Milken Institute SPH.

The report, Repealing Federal Health Reform: The Economic and Employment Consequences for States, by Ku and his colleagues Erika Steinmetz, Erin Brantley and Brian Bruen, all with the Milken Institute School of Public Health’s Department of Health Policy and Management, will be posted after the embargo lifts at http://www.commonwealthfund.org/Publications/Issue-Briefs/2017/Jan/Repealing-Federal-Health-Reform. A longer version of the report, including complete explanation of the study’s methods, will be posted at https://publichealth.gwu.edu/sites/default/files/downloads/HPM/Repealing_Federal_Health_Reform.pdf.