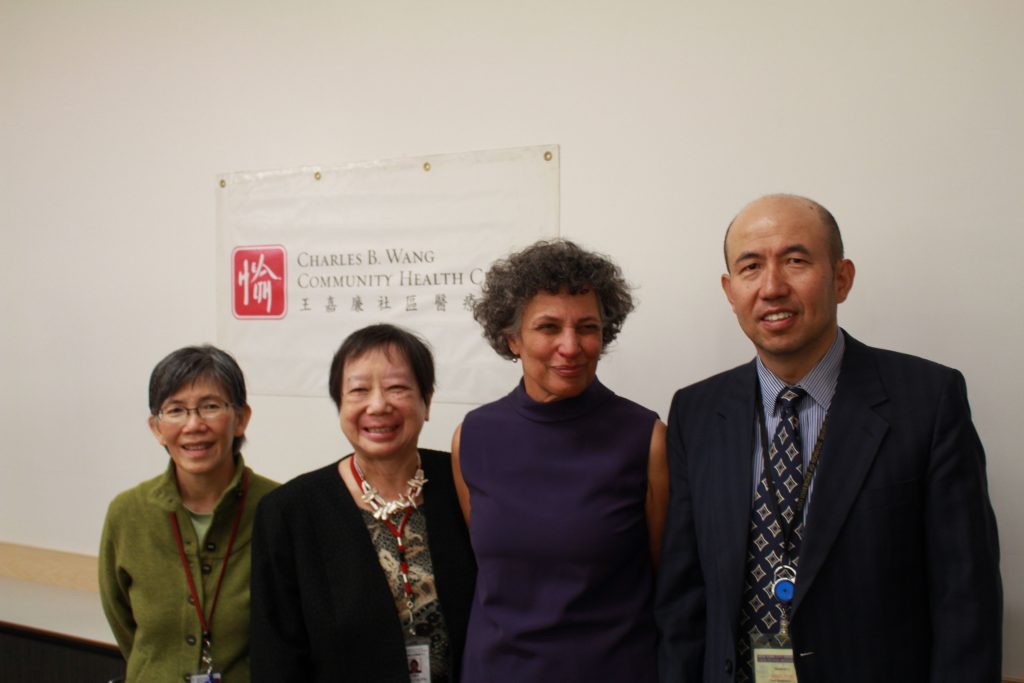 (clockwise) Charles B. Wang’s Regina Lee and Jane Eng with Commissioner Mary Bassett and Dr. Wenhui Li of the NYC Department of Health and Mental Hygiene

Lung cancer is the leading cause of death in the New York Chinese community and the rate of lung cancer deaths, which declined by 16.4% citywide, increased a staggering 70% among Chinese New Yorkers from 2000-2014.

These findings, from the new “Epi Data Brief” recently released by the New York City Department of Health and Mental Hygiene (NYC DOHMH) under the leadership of Commissioner Mary T. Bassett, MD, MPH, and Director of Statistical Analysis and Reporting, Wenhui Li, PhD are part of a startling first-of-its-kind analysis of mortality data compiled and issued by the health department on the leading causes of death for New Yorkers of Chinese descent.

For Jane T. Eng, J.D., President and CEO of the Charles B. Wang Community Health Center (CBWCHC), the challenges are enormous as tobacco use has increased dramatically in the Chinese community, among males in particular.  Statistical data shows that an alarming 68% of men smoke in China and the country is the #1 tobacco manufacturer in the world. Overall, social pressure to smoke and the widespread availability of inexpensive cigarettes within the Chinese community greatly hinder smoking cessation and help explain why numbers are trending in the wrong direction. CBWCHC provides awareness, education and direct smoking cessation through initiatives like the tobacco dependency treatment intervention project, supported by a grant from the RCHN Community Health Foundation.

The health center, in collaboration with the NYC DOHMH, is promoting an anti-smoking campaign featuring resources like the Asian Smokers Quit Line, which provides free, accessible, evidence-based smoking cessation services in Cantonese, Mandarin, Korean, and Vietnamese to Asian communities in the U.S.

Citywide, efforts are underway to help address the goal of improving health outcomes by making it harder to smoke.  At a recent press conference , Dr. Bassett, a former smoker who understands the issues first hand, reported on  pending legislation supported by the DOHMH and CBWCHC, which if approved by the New York City Council, will help raise cigarette prices, ban cigarette and tobacco products from pharmacies, and reduce the number of tobacco retailers citywide.

In addition to smoking-related illnesses such as heart disease and stroke, the Epi Data Brief provides the top 10 leading causes of death among Chinese New Yorkers, revealing other areas of concern such us nephritis and suicide. The report shows 40% of those with mental health issues smoke, prompting Dr. Bassett to promote THRIVENYC, a website geared toward helping those with mental health challenges, and NYC Well, a 24/7 helpline for anyone dealing with stress, depression, and thoughts of suicide.

Commenting on the data, Dr. Mouchuan (Teddy) Chen, LCSW, PhD, Director of Charles B. Wang’s Mental Health Bridge Program, linked suicide to the stigma and shame of mental illness. He remarked that the enormous stresses caused by immigrant life take a toll on the community. Many community members lack the knowledge or resources to access care, and when they do seek care, may be faced with long waits for services.

Through a robust mental health program, Charles B. Wang’s doctors have become the “eyes and ears” of their communities. Dr. Chen noted that in 2015-2016, CBWCHC referred over 50 patients for depression, suicidal thoughts, uncontrolled psychosis, and other mental health conditions. The health center continues to advocate, collaborate and provide services focused on prevention, early detection and treatment. These are clearly steps in the right direction to improve outcomes for this high-risk and vulnerable community.