Full Circle: Once a Peds Patient, Now a Doctor at Jericho Road. 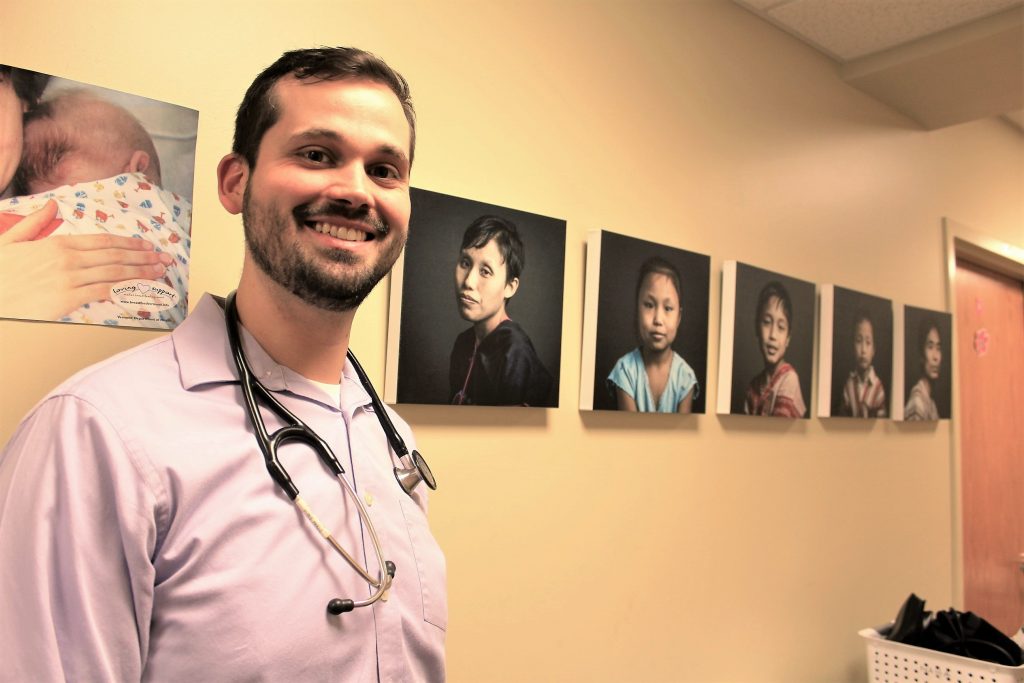 Dr. Ethan Gable was a patient at what was then known as Jericho Road Family Practice (JRFP) when he was a child.  Then a family practice located in upstate New York, JRFP served the area’s vulnerable refugees and underserved, low-income communities. Back then, he never entertained the idea that he himself would become a doctor. Growing up as a poor kid, on Buffalo’s West Side, he wasn’t very focused on school: “The main goal was to stay out of trouble…from early on, I got suspended from school a lot. Any time you have the distractions of home…then, classically the kid acts out in school and isn’t as attentive.”[1]

In high school, Gable watched as his smart and talented older sister began a lifelong struggle with drugs, and decided that he was going to take a different path. Gable reached out to Dr. Myron Glick, one of the clinic’s founders, and began volunteering at the practice weekly, helping with the intake of refugees served by the clinic, doing paperwork, assisting the nurses and learning about the clinic and its focus on the needs of the community. Yet, even with this interest in medicine, Gable still didn’t see himself becoming a doctor, “I didn’t consider myself the college type. I did poorly on my SATs…academics just wasn’t a focus.”[2]

Still, he was accepted into college and continued to volunteer. In the midst of transferring from SUNY Buffalo State College to the University at Buffalo, Gable received the news that his sister had been shot in a domestic incident. Watching the doctors care for his sister made Gable both appreciate their dedication, and realize that he needed to take control of his own life.[3] After some time off from school to help his sister heal from her injuries, Gable returned to college with a renewed sense of purpose. Once he graduated, he applied to medical school, initially failing the physics portion of the MCATs, but ultimately gaining acceptance to the University at Buffalo School of Medicine. As a congratulatory gift, Dr. Glick bought him his first stethoscope and otoscope, which Gable still has in his office. [4] Dr. Glick’s mentorship and encouragement proved invaluable: “There was no magical moment in my life when all of a sudden I was on my way to medical school. It was the constant support and relationships, investments in me [that] enable[d] me to realize that I could succeed.”[5]

Meanwhile, Jericho Road had grown. Building on an earlier partnership with Jericho Road Ministries, and a merger with Hope Refugee Services, the practice was designated a community health center, helping the organization to expand its patient-focused, community-oriented model of care and offer a broad range of high quality, accessible services.

It was to this larger, stronger Jericho Road Community Health Center that Dr. Gable returned, now as a practicing physician. After completing a residency in OB/GYN at the University of Rochester, Dr. Gable became Jericho Road’s first OB/GYN doctor. A year later, Gable was appointed Jericho Road’s chief medical officer, working under the leadership of Dr. Glick, who is now the health center’s CEO.

In his new role, Dr. Gable will oversee medical care provided at the health center’s three Buffalo locations. Gable is excited by his new responsibilities and looks forward to caring for patients, while also figuring out ways to strengthen the organization to best serve the community. “In reflecting on my life and relationship with Jericho Road and mentorship with Myron, one of the main things that comes to the fore is the constant investment and relationship with the community. You can be a health care center and provide care and you can see your patients for 15-minute appointments, but to actually have significant social change, I think that’s done best by building those relationships with the community and having the investment in the community. That has to be done over time.”[6]