Beneath the cobblestone streets and quaint coastal charm of Savannah, Georgia lies a persistent undercurrent of deep poverty. For nearly one-third of Savannah’s residents, food scarcity, unstable housing, and economic marginalization define daily life. Nowhere is this issue more evident than among the city’s youth, whose experience of deep poverty and instability are reflected in rising rates of juvenile homelessness and incarceration.

Juvenile incarceration is associated with adverse health outcomes in later adulthood, but for many vulnerable youth, the problems start much earlier. Lack of access to consistent, comprehensive primary, oral, and mental health care is not only detrimental to long-term health, but impedes early development and exacerbates other social and economic stressors.

Health practitioners in Savannah, like the staff at Curtis V. Cooper Primary Health Care (CVCPHC) have long observed the complex relationship between poverty, health, and social success for children and teens in their communities. Yet early and consistent interventions can make a difference.

In one case, a simple vision screening – which had been missed due to very irregular primary care – revealed that a young student had poor eyesight. This child had been transferred to an alternative learning program because he appeared inattentive, was often disruptive, and frequently engaged in fights with his classmates. His behavior and engagement improved as soon as he got glasses, and so did his chances for future success.

Georgia’s comprehensive juvenile justice reforms of 2013 provided a significant overhaul to a punitively-oriented framework for addressing youth behavior, and an opportunity to develop community-based, problem-focused interventions for young people.

Against this backdrop, and in conjunction with CVCPHC and the Chatham County Juvenile Court, the Georgia Primary Care Association (GPCA), which represents the state’s 35 community health centers, is spearheading a new pilot program to provide comprehensive primary care services to youth in the juvenile justice system.

These organizations will build on existing collaborations to coordinate access to health care for vulnerable adolescents. By engaging youth, facilitating referrals for their care directly from the court system and other agencies, and enrolling them in medical homes offering screening, primary care, and behavioral and oral health care services, this initiative aims to improve the health and social success of the community’s underserved and at-risk teens.

The recent interagency project launch included the Chatham County Juvenile Court Judge, probation officers and court staff as well as GPCA and CVCPHC personnel, who share a deep commitment to the youth they serve. By working together to engage teens, enhance services and bridge gaps in care, these organizations hope to prove that the social and emotional health of vulnerable, high-risk adolescents can be improved, with long-term community benefits.

Duane Kavka, Executive Director of the GA Primary Care Association, stated that “Building positive relationships between our member FQHCs in Savannah and the juvenile justice system means that the most vulnerable youth in the community will now have a true medical home.” With resources and cooperative support from the RCHN Community Health Foundation, “we will now have the opportunity to create a model for how care may be coordinated among adolescents who most often have remained outside the traditional system of care,” said Lakisha Samuels, Project Director. 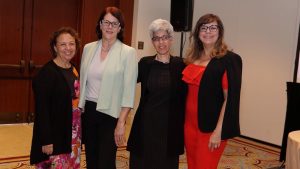 Community Care Cooperative (C3) is a newly-formed Accountable Care Organization (ACO) founded and governed by 15 community health centers in Massachusetts in response to the restructuring of the Massachusetts Medicaid (MassHealth) program under a Federal 1115 waiver. C3 was first launched as an ACO pilot, and began to prepare immediately for receiving a full ACO award. In anticipation of the new operational and clinical realities of the ACO environment, and with support from RCHN CHF, C3 developed a collaborative project titled, ‘Enhancing Learning in ACO Implementation Through Peer-to-Peer Learning’, with the objective of creating a facilitated, peer-to-peer learning environment for health center clinician leadership. Launched in July 2017, and co-sponsored by the Massachusetts League of Community Health Centers, the effort has engaged CHC chief medical officers, medical directors, and behavioral health directors from the ACO’s member centers.

Dr. Julita Mir, C3’s Chief Medical Officer, worked with the program participants to identify topics of mutual interest for expert-supported learning group sessions, all focused on some aspect of achieving the collective goal of sustainable, effective primary care within the ACO framework. Session themes to date have included Transforming Pre-visit Planning to meet ACO Goals and Optimize Care Team Functioning, Access to Care in a Value-Based Model, Best Practices in Behavioral Health Integration and Implementing Universal Screening for Social Determinants of Health. Following each session, participant feedback is reviewed by the planning team to evaluate the learning structure and process, and to inform the selection of future topics. The peer-directed approach establishes a collaborative environmen,t in which clinical leaders can come together to share best practices and innovations, and are then equipped with the knowledge and tools to implement effective practice transformation strategies within their own organization.

A year in, the Community Care Cooperative and participants in the learning group reflect on the value of the program and strength of the collective, coordinated approach. “I felt the discussion to be most valuable, that honest talk was helpful, both to acknowledge the challenges and help move through to a place of action” said Sue Melucci, Director of QI at Edward M. Kennedy Community Health Center, and a member of the learning group.

With nine sessions completed since September 2017, and two summer sessions already in the works, C3 plans to extend the program well into 2018. By fostering cross-organizational learning and collaboration, C3 is helping health centers to strengthen their practice and be successful in a value-based environment, while advancing their core missions and commitment to the communities they serve.

An important new study presented at Academy Health by researchers from Milken Institute School of Public Health uses a mixed methods approach to simulate the effect of proposed federal changes designed to transform the Medicaid program. The authors show that Medicaid block grants and per-capita caps could cause health centers to lose revenue and would limit capacity in underserved communities, especially in Medicaid expansion states. Eligibility-tightening modifications are likely to further reduce revenues and service capacity, especially at HCs with a greater Medicaid population and thinner margins.

Our newly expanded repository of resources for population health, including tools for: community-level population health improvement; patient identification, assessment, and stratification; partnerships & multi-stakeholder collaboratives, and more, is available here! Check back for updates.

In case you missed it

A new analysis from the Geiger Gibson/RCHN Community Health Foundation Research Collaborative at the George Washington University’s Milken Institute School of Public Health found that the number of patients using community health centers grew 33% nationwide between 2010 and 2016. The study, by Peter Shin, PhD, MPH, Jessica Sharac, MSc, MPH, Rachel Gunsalus, MPH and Sara Rosenbaum, J.D. underscores the need for health centers in communities across the country and the importance of both Medicaid expansions and the Community Health Center Fund. Read Changes in Health Center Patients Served, 2010-2016 and see related stories in Modern Healthcare, FierceHealthcare and WAFB. 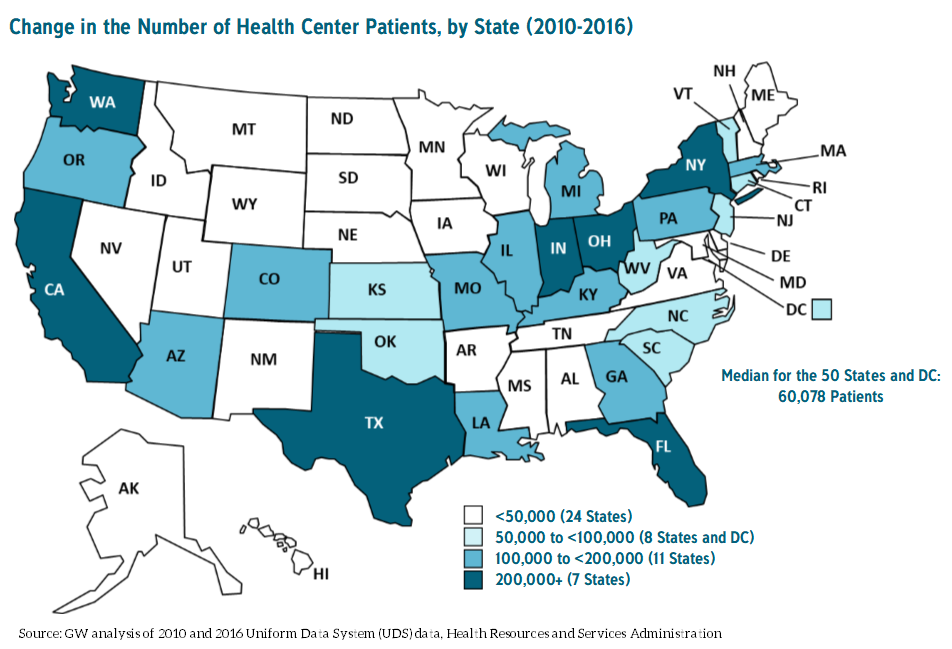