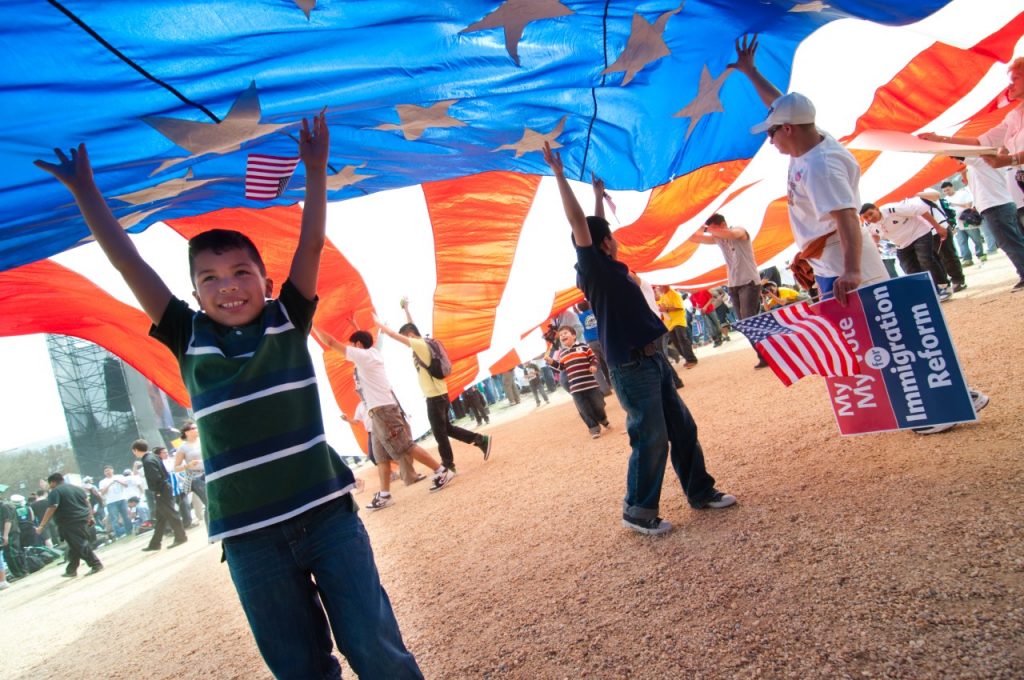 Community Health Centers (CHCs) serve more than 28 million people annually. By mission and mandate, CHCs are typically located in high-need, low-resourced areas, and serve all members of the community, regardless of ability to pay. The recent public charge rule is expected to have a major impact on community health centers and the individuals and communities they serve, both directly and because of the “chilling effect” that is expected to hamper utilization of services, even by those not directly affected. Only a few weeks into the implementation of the final rule, we spoke with the California Primary Care Association (CPCA) and The Association of Asian Pacific Community Health Organizations (AAPCHO) to learn more about what they are seeing on the ground, and how health centers can best inform staff and assist patients going forward.

Background
Public charge is a term used in immigration law to describe an individual who is dependent on the government for subsistence[1], and therefore a ground of inadmissibility, making the individual ineligible for admission into the country or adjustment of their legal status to permanent residency. On August 14th, 2019, the Department of Homeland Security (DHS) published a final rule in the Federal Register defining who can be considered a public charge in granting legal permanent residency (LPR) or other adjustments of immigration status. The new rule had been scheduled to take effect October 2019, but multiple injunctions issued by federal courts placed a hold on the implementation of the rule. In January 2020, a U.S. Supreme Court decision lifted the last remaining nationwide injunction, and on February 21, the Supreme Court lifted the last remaining, Illinois-only injunction, allowing DHS to implement the new public charge rule nationwide on February 24, 2020 for immigration cases decided inside the United States by U.S. Citizenship and Immigration Services (USCIS).  Meanwhile, new Department of State (DOS) rules related to public charge also took effect starting February 24, 2020, at the same time as DHS rules; the DOS rules apply to people who go through an immigration interview process outside the United States, at a consulate or embassy, to get their green cards.

Who is covered by the rule?
The public charge test does not apply to every immigrant. The rule directly affects only those individuals who are eligible to apply for legal permanent residency, commonly referred to as a green card.[2] Certain immigrants are exempt from the rule, including refugees, asylees, victims of trafficking and other serious crimes, special immigrant juveniles, and domestic violence survivors, or persons with Temporary Protected Status (TPS)[3].   Many immigrants living in the U.S. will not be directly subject to changes to the rule, because they are generally not eligible to apply for a green card. But if their circumstances changed and they became eligible for a green card, they would be subject to the rule.

Who is impacted by the rule?
While the population covered by the rule is defined under the law, immigrant communities have been much more broadly impacted. Carmela Castellano-Garcia, Esq., President and Chief Executive Officer of the California Primary Care Association (CPCA), explained, “It’s important to remember that the rule does not impact ALL immigrants. In reality, the rule only applies to a small population, but the fear and confusion around the rule is creating a chilling effect and discouraging many from accessing lifesaving services.” She added, “We encourage community members to inform themselves if and how the rule may impact them and their family before choosing to dis-enroll from programs they legally have a right to obtain.”

Public benefits included in final rule
The final rule changes the historic definition of public charge. Under the final rule, the DHS defines a public charge as someone “who receives one or more public benefits…for more than 12 months, in total, within any 36-month period.” The benefits include federal, state, local or tribal cash assistance for income maintenance, which has been considered under the pubic charge rule for years. Cash assistance programs are the only state or local benefits that are considered. As of February 24, 2020SNAP, Section 8 housing assistance and public housing, and federally-funded Medicaid will be considered in the public charge test. There are some Medicaid exemptions, for emergency Medicaid, benefits received by a person under 21 or during pregnancy and for 60 days after, and by those on active duty or Ready Reserve members of the armed forces and their spouses and minor children. [4] If a person uses more than one of the listed public benefits each month, then each benefit will be counted separately for the month (so for example, if a person used both Medicaid and SNAP in one month, then it would be counted as two months). Being enrolled in the program may be counted as “use.”

The law provides that those who are viewed as likely to become dependent on the government in the future are inadmissible, and gives immigration officials have broad discretion when determining if a person is likely to become a public charge in the future. The Immigration and Nationality Act (INA) requires officials to consider a variety of factors contributing to a person’s ‘totality of circumstances’, that is, a number of specified factors including age, health, family status, assets, resources, and financial status, education and skills, prospective immigration status, expected period of admission, and Sufficient Affidavit of Support.[5] Under Section 213A of the INA, the affidavit is used to demonstrate adequate means of financial support for the intending immigrant, by their U.S. sponsor, and show they are unlikely to become a public charge.[6]

The chilling effect
Receiving health center services on a sliding fee discount will not impact a person’s immigration status. Still, the rule could have deep consequences for community health centers and their patients, especially because of the “chilling effect,” or the potential that immigrants and their families otherwise eligible for benefits will not apply, or will disenroll from public benefit programs in which they participate. Early information, and experiences prior to the adoption of the final rule, is bearing this out.   “The changes to Public Charge are devastating to immigrant communities. Even if the rule doesn’t apply to them, we’ve received anecdotal information from health centers regarding patients expressing fear of enrolling into services, and in some cases, asking to dis-enroll from lifesaving programs, because they’re afraid that could lead to deportation procedures for them or their family members,” said Ms. Castellano-Garcia.

Jeffrey Caballero, Executive Director of AAPCHO, elaborated on the complex and confusing nature of the rule, noting that the chilling effect is further compounded by other changes to immigration policy nationally, both adopted and under consideration, resulting in fear and anxiety within immigrant communities. Among these policy changes are: the Department of Justice (DOJ) Public Charge Ground of Deportability, a pending rule currently under review with the Office of Management and Budget (OMB) that would change the public charge ground of deportability. While typically narrow in application, changes to the deportability grounds would have a chilling effect; the President’s Proclamation, requiring immigrants to have health insurance within 30 days of entering the country, or the demonstrated ability to pay out-of-pocket medical expenses; Department of Housing and Urban Development (HUD) proposed rule that would change the agency’s eligibility requirements for federal housing assistance based on immigration status and if finalized, effectively prohibit mixed-status families from living in federally funded housing; Similarly, the Department of Agriculture Rural Housing Service proposed rule on mixed status families living in Multi-Family Housing would make the agency’s housing eligibility rules conform to the HUD rule.; and the Social Security Administration (SSA) proposed changes rule to remove Limited English Proficiency as a consideration when making a disability determination;[7] A proposed end to the USCIS Deferred Action policy for people facing serious medical conditions was subsequently reversed.

The spillover effects of the rule have consequences for the broader communities served by health centers, because as patients dis-enroll from coverage, and Medicaid revenue is reduced, health centers could be forced to cut staffing, see fewer patients, or reduce services. In a 2019 study by Geiger Gibson/RCHN Community Health Foundation Research Collaborative colleagues, researchers estimated that health centers nationally could lose between 165,000 and 495,000 Medicaid patients annually. As revenue and capacity decreases, the number of patients served nationally could be reduced by at least 136,000 and as many as 407,000. Mr. Caballero noted, “For health centers, a reduction in the number of insured patients and an increase in uninsured patients can “disrupt the continuity of care that health centers strive to provide to patients, impacting quality outcomes in health centers and health outcomes of patients they serve.” Such disruptions to continuity of care, especially for those with existing health conditions, can likely result in an increase in emergency room utilization in these communities. Further, the COVID-19 pandemic introduces a new threat, despite a recent USCIS announcement that testing, treatment and preventive services for COVID-19 would not negatively impact a public charge test;[8] as new health threats such as COVID-19 emerge, both fear and hesitancy to seek care, or limitations to its availability, can be especially devastating.

In these early weeks following the implementation of the rule, its full impact has not yet been felt. But as the rule rolls out, it is important for health center staff to be trained and informed about the scope of the rule. Mr. Caballero, of AAPCHO, recommends that health centers establish partnerships with other community-based organizations to create more seamless and trusted referral networks within the community. He adds that health centers can participate in national and local efforts to document the harm, not just for patients and communities but also the impacts on safety-net infrastructure that serve those communities- “we can’t risk having these safety net systems not being able to continue providing vital services to our communities.”

Curbing the spread of misinformation is vital. Adam Carbullido, Director of Policy and Advocacy at AAPCHO explained, “Health centers have started learning and educating their frontline staff and other staff members about what public charge is – and what is isn’t – and being able to relay that to their patients is critical. There are many people fighting for their behalf, in their corner so they can receive the health care they need, and that they feel welcome and a valued member of our society, because they are.”

Resources
Through national and community collaborations, there are a variety of educational materials and resources for health centers, staff, patients, advocates and community members.
These include:

AAPCHO: you can access a variety of resources from AAPCHO and partner organizations via their website including FAQs on public charge, know your rights and educational material. Resources are available in English, Chinese, Korean, Thais, Vietnamese, Hindi, Hmong, Korean, Spanish and Tagalog.

Protecting Immigrant Families (PIF): COVID-19 and Public Charge: What Immigrant Communities Need to Know. Other resources include know your rights material and resources in languages other than english as well as more information on policy and legislative threats here.

One Nation Coalition: public charge FAQ for community members, including in languages other than English.

Special thanks to Carmela Castellano-Garcia and Liz Oseguera from the CPCA and Jeffrey Caballero and Adam Carbullido from AAPCHO for their assistance.